I’ve been thinking I’d like to brush the dust off this old blog and start to make some more use out of it.  Other than posting the weekly newsletter and visiting with the members who pick up at the farm, I don’t get to communicate with our subscribers or other people in general about the goings on of the farm.  This will also give my family and friends an opportunity to see what I’m up to.  My goal here is to give more anecdotal, slice-of-life stories and happenings up at Seeds of Hope so you can get a sense of what life is like as a (sub)urban farmer.  Of course it wouldn’t be a farming blog without filling you in on what I’m eating, after all it IS eating season, right?  I’m planning to update regularly but I have no idea what regularly means, so we’ll just see how it goes.  Hope you enjoy.

After a few sunup to sundown days I had gotten the first planting of the warm season plants in:  tomatoes, cucurbits, peppers, and some late-June bok choy’s, lettuces and napa cabbages; and managed to get the weekly harvest in.  I think I’m the last farmer in the Midwest to plant my tomatoes every year but with a frost advisory the second week of May I finally wasn’t the nervous one.  On Tuesday morning I was wearing an extra layer under my pants and a jacket while I was planting four beds of summer squash, zucchini, and cucumbers carefully into the woven, black landscape fabric I use as a mulch.  The planting didn’t take more than an hour, but the prepwork and post-planting regime took considerably more time.  The beds were worked the previous day and I had laid out the new landscape fabric and stapled it in place with 8 inch sod staples every three steps or so for ninety feet – the length of my beds.  Under the fabric I had ran a line of drip tape for irrigation off a fifty pound spool I’ve been lugging around from bed to bed.  I form a makeshift toilet paper dispenser of sorts so I can easily take the end of the tape and run it down to the end of the bed and tie it off.

Just after dawn I marked off my holes with green spray paint every three feet on the new fabric and lit the blow torch to get the end hot.  It’s a simple device that I also use as a flame weeder.  I let the flame blow for a few minutes to get the end hot then shut off the gas valve.  Picking up the propane tank I hustle up the bed burning holes where the spray painted circles are and where the plants will be, careful to avoid the drip tape which I can’t see and hopefully pushed far enough to the side so I don’t burn it too.  Every twenty or so holes I have to stop and relight the torch because as I press the hot metal onto the fabric to burn a hole, the end of the torch sinks a little into the loose soil causing it to cool down, so the faster I move the more holes I can burn before I have to relight it.  The purpose is to burn a big enough hole to get the plant in the soil underneath, while the rest of the solid fabric keeps weeds from growing and regulates moisture in the soil.

Anyway, the plants were in and the row cover was on, and here we are two days later on Thursday afternoon just after lunch.  We had a few brief showers that morning but now the sun had come out and we were up to just over 80 degrees and humid.  I was walking out to the caterpillar tunnel to ready a bed for cherry tomatoes which I was hoping to get in a few days ago but didn’t have enough light.  On a whim I decided to peak under the row cover at the cucumbers since I had noticed a few aphids on the underside leaves when I was transplanting.  As soon as I lifted up the row cover heat poured out on my face and I saw those baby plants laying down struggling for life; my plans for the day changed.  All the cucurbits, better known as squashes, were completely dehydrated, laying wilted on the hot, black fabric.  All of the water from their cell walls had been rushed to their roots to maintain vital functions in a last ditch effort to stay alive.  I couldn’t believe it.  They had been watered in two days ago and it showered on and off all morning.  I love growing with row cover, the benefits are many, but you can’t see your plants and you’ve got to remember that.  I scurried down the beds ripping up the staples and throwing off the row cover in a fit of  managed panic – a familiar feeling – and carefully laid the fabric between the beds so as not to damage the tender, flaccid plants.  Right now I keep my hydrant off if I’m not using it because of a leaky manifold (‘nother story) so I ran to it and pulled the handle up.  The manifold which I run three hoses from luckily sits right near the squash beds and I just so happened to have a 100 foot hose equipped with a watering wand on it, so I grabbed it up and started carefully watering the dying plants thinking up contingency plans if I lost the crop.  The plants were four weeks old; so, squash, zuchinni and cucumbers four weeks late at best if I started more today.  I’d need to figure out how to fill that gap in my CSA boxes in five or six weeks when I would start harvesting, and I’d have to make a decision quickly.

About halfway through watering a lovely woman and her daughter walked over and inquired about the farm.  I tried real hard for a second or two to explain our program and what we do but ended up motioning emphatically to my dying plants I had just planted two days earlier.  She understood and they took off to another section of the farm while I finished up watering.  About fifty feet away a shaky plastic shed that’s fallen down three times houses several large pieces of woven shade cloth – and no telling what else.  I’m not sure how many pieces of it I’ve got, four or five, or what lengths or widths they are, but I know about how much bed space I can cover with them, somehow, so I grabbed one and kind of bear hugged it and started dragging it to the beds, trying to figure out how wide it was.  I got it on and it covered all four beds for about 60 feet, so I tightly sandbagged the ends to keep the slack from laying on the plants and ran around picking up sandbags weighing other things down. I ran them to the squash beds three or four at a time and placed one at each wire hoop to keep the side of the cloth from blowing on the plants (the wire hoops are placed every ten feet or so and form a skeleton which supports the row cover or shade cloth).  By then the woman and her daughter had made it back around to me and I saw a big, thick cloud start to cover the sun – this would give the plants I hadn’t covered yet a enough of a break while I spoke with the woman and her daughter, which I did, then I hurried and covered the rest of the plants.  I kept a close eye on those little guys through the cloth and over the next few hours they started standing back up and I felt a little more confident.

Another twenty minutes and those plants probably would have been dead.  I’da gone to check on them the next morning (maybe) and they’da been all shriveled up and yellow and I woulda wondered what the heck happened.  But they weren’t dead – just close – and I wasn’t even headed over there to check on ‘em.  Just got lucky I suppose.  Funny thing about it is I got the shade cloth on about 2 o’clock knowing the whole time I was going have to take it off again (and put the row cover back on) before I left around dusk because we were expecting storms and I was afraid the wind would blow the cloth off all over the plants and cause a lot of damage.  And if I left the row cover off during the storms the wind would batter the plants since they were young and in pretty bad shape.

What was all that, then – diligence or luck?  Sometimes I can’t tell.  Sometimes you have to build a wall all day just to tear it down before night sets in– such is life.

My work is very physical right now to say the least, so I’m adding a lot of eggs to my diet for energy and muscle repair.  I’m a passionate localvore so I always seek out eggs from farms I’m familiar with.  Anyways, this past week I’ve been eating  spaghetti with garbanzo bean sauce.  It sounds fancier than it is.  It isn’t life-changing but it’s very hearty and tastes better after it’s been in the fridge; good qualities for long days.  I very loosely followed this recipe.  To the noodles and sauce I added ground pork sausage which was browned with onions and garlic, sunflower seeds, arugula, and of course a couple of fried eggs with scallions.  Mushrooms would have been nice too if I could just remember to buy them.   A nice spring mix is obligatory, of course.  Til next time. 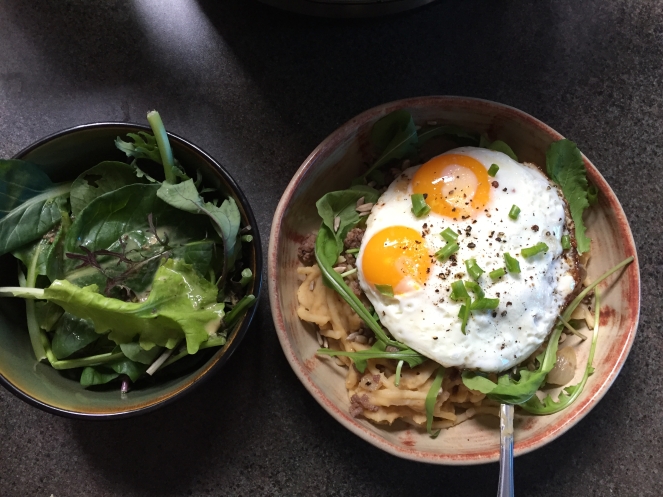 View all posts by farmerjakesohf

One thought on “Under Cover”